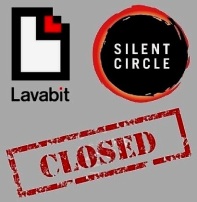 Ladar Levison started the email service Lavabit ten years ago; taking a significant amount of his adult life building his business.  While it’s understandable some in the government could be concerned over the use of non-government interceptable communications (is that even a phrase?) being used by terrorists or other people bent on causing whatever, this fact isn’t what disturbs me.

What deeply disturbs me, is he was forced to close, then under a gag order of the United States Government, isn’t allowed to discuss it at all — not even with his LAWYER.

Has it come to such a point where the United States will use legal scare-tactics to not only shut down threatening interests, but even deny those people (when they, themselves, have done nothing wrong) the right to not only defend themselves against it, but silence them?

I get that Lavabit was seen as a threat by the US Government, I’m not denying that.  Stuff like that CAN a threat.  It’s that they went after the owner, who has business interests in keeping people’s private information PRIVATE, and they essentially scared him into silence to such a point, he can’t even legally consult his lawyer.