Steve Jobs was the very heart of Apple’s “cool.”  His drive for absolute product perfection to the point where he drove people around him to anger paid off every time for Apple.  It’s innovative products from the first consumer-friendly computer, to his latest innovation we know he was involved with, the iPad — all paid off huge for everyone at Apple… even the stockholders!

However, there is one indisputable fact: While Apple is still very popular with those who value the premium computer product, such as myself — Apple’s [outward] innovation has apparently slammed into a brick wall.  I say [outward] because none of us are privy to what goes on in the R&D Labs at 1 Infinite Loop, but it no doubt continues.  Since the iPad, while Apple has produced new upgrades and models of its lines, there’s been nothing particularly innovative since Steve Jobs passed away.

Steve demanded to be the official final signoff on any product that Apple marketed.  If EVERYONE else liked it, but Steve didn’t, it didn’t make it out.  He’d either nix the product, or demand changes.  I think this is why Steve and Apple were so successful.  The finished product didn’t make it out onto the floor without Steve’s OK… and his OK took a lot of work to make happen.  He settled for nothing less than his view of absolute perfection.  Smooth lines, nice edges, perfect glass. 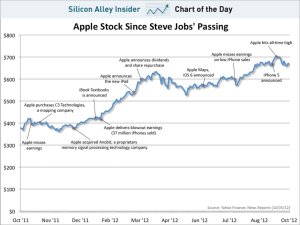 While Apple has obviously done well with itself and it’s market capitalization since Steve’s unfortunate demise, the chart to the right shows that overall, Apple stock has remained strong, and remained on an upward trajectory… showing that the market and the people who own it continue to have the utmost confidence in Apple’s future.

Like any other Geek, particularly Apple Geek, I mourned the face of geek culture when Steve passed away — I suppose like anyone else would have.  Indeed, my sister lead a large movement that took off HUGE on Facebook, that had us all wearing black for Steve the day after he died.  Without his innovation, will Silicon Valley and the Technology sector be able to recover what was lost — both the face of the culture, and the innovation of it?

However, will that change if Apple can’t soon release a product that shows it can think without Steve — and that those products will be of the same quality he demanded?  Will Apple continue to innovate and be the premier, premium product purveyor (lol, I didn’t do that on purpose, I swear…) that the guy in the blue jeans and black mock-turtleneck was known for delivering — every time?