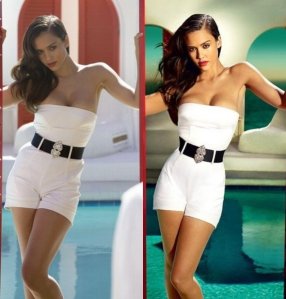 Recently, the internets have been abuzz regarding possible Anti-photoshopping/Anti-extreme photoshopping use in advertisements, claiming that ad agencies and companies are overusing photoshop and other airbrushing tools to make people self-conscious as to how they feel about themselves, because of unrealistic images given by ads.

I see two problems with this:

One, virtually everyone knows that advertising is always over-done, airbrushed, polished and given the best possible view as to what an item is. That $1 sandwich on TV isn’t what it looks like, usually… the car on TV isn’t always driving at 110 MPH on the road, with a license plate that matches the color of the vehicle, likewise, women aren’t all D-cup, 115 pound blondes of walking sex.

As we speak, Congress is currently considering the Truth in Advertising Act, which would, among other things reign in on airbrushing and excessive photoshop effect usage in advertisement — a good idea on the surface…  but…

That having been said, doesn’t the legislature have enough problems to deal with? Past consumer education on what *I* [admittedly…] consider non-issues, don’t we have Veterans Health benefits to worry about? What about school funding? Are we to believe that the government’s partisan infighting is over?

Don’t get me wrong, I’m for political-correctness… but… isn’t this taking it too far? Particularly when we have bigger issues to tackle in Congress? I mean, I’m a guy, so I’m not on the receiving end of a LOT of what society puts on people to be “pretty, sexy and hawtt,” but… what say you?