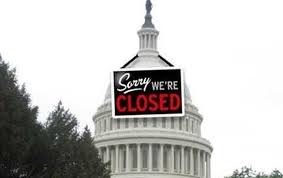 “Due to the failure of Congress to enact appropriations for fiscal year 2014, Office of Management and Budget Director Sylvia Mathews Burwell tonight directed agencies to execute their plans for an orderly shutdown of the Federal government.”

Basically, all that gobbledygook means at this point, we have no functioning Federal Government.  With the exception of the President, Congress and the most essential services, including a limited federal police force and the United States Military — there are currently no Federal employees properly employed at this time.

Why should you care?

Under the Constitution, the Federal Government is required to appropriate monies for each and every program, and each and every check cut from the United States Treasury.  In fact, it is the *SINGLE* specifically doled out duty to the Legislature in the Constitution.  This means that Congress has failed to do it’s one, specifically mandated duty in this instance.  When monies are not appropriated by Congress, the Treasury, and President Obama cannot write A SINGLE CHECK.While many essential services continue, our prisons keep dangerous offenders behind bars and our borders stay secure, these are often at reduced levels.  It’s not uncommon for a great majority of these employees to be furloughed and do a 12 or 24 hour “watch,” so that employment levels can be reduced while they, literally, don’t know if they’re being paid next pay day.  States depending on Federal aid, such as the State of Michigan, a THIRD of the State’s Budget comes from Federal Resouces!  $18 MILLION a day!  This stops.   Pay for Veterans and our most vulnerable citizens?  No money is appropriated by Congress.  That stops.This basic breach of trust in Congress, this singular act of defiance by BOTH houses, but particularly by Congressional Republicans; willing to throw the Government into chaos over a single piece of legislation that has survived EVERY echelon of Democracy otherwise known to Man is nothing short of unacceptable.  A Congress that not only continues to be paid when virtually every other Federal employee wonders when s/he will be paid next, but requires over THREE MILLION DOLLARS a day to function to begin with, must be questioned in not only it’s ethics and integrity, but also it’s loyalty to the American people.Moreover, when it comes to the Healthcare lobby: it is the most powerful and numbered lobby in Washington, with *SIX* (registered!) lobbyists per MEMBER of CONGRESS, that have spent in excess of $150 Million to lobby them.  That’s over $14,000 per MEMBER!  When you take into account that the Healthcare lobby doesn’t pander to a third of Congress at ALL, it’s an even MORE shocking figure.  When you hear people, such as Speaker John Boehner say that the Obamacare issue is about “fairness to the American people,” when he is bought by them for over $1.6 MILLION — can you honestly trust what he says to be PURELY representative to your interests as a citizen?

Remember the cause of this problem when you go to the polls in seven weeks… and be an educated voter, regardless of what side of the Aisle you poll for.